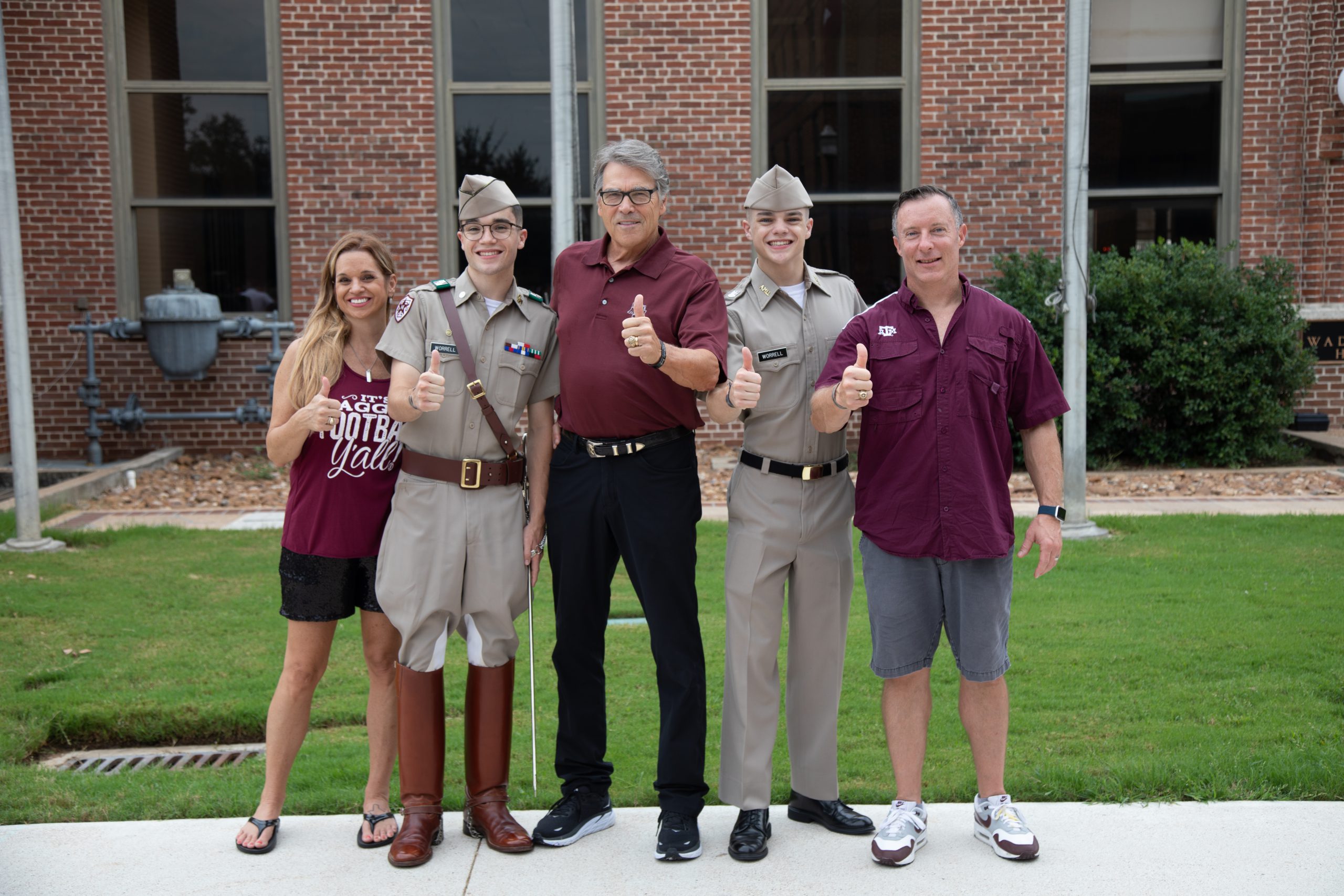 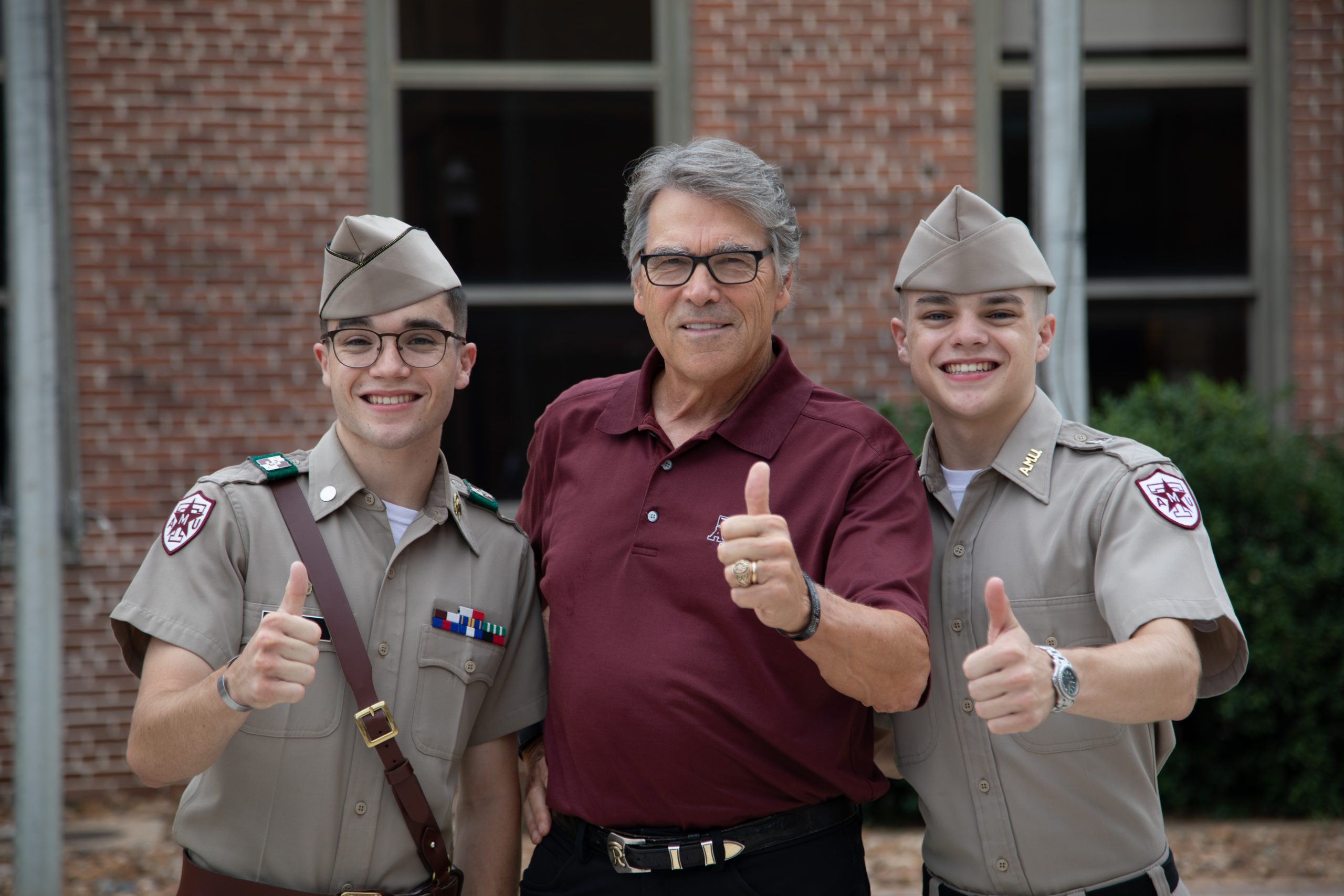 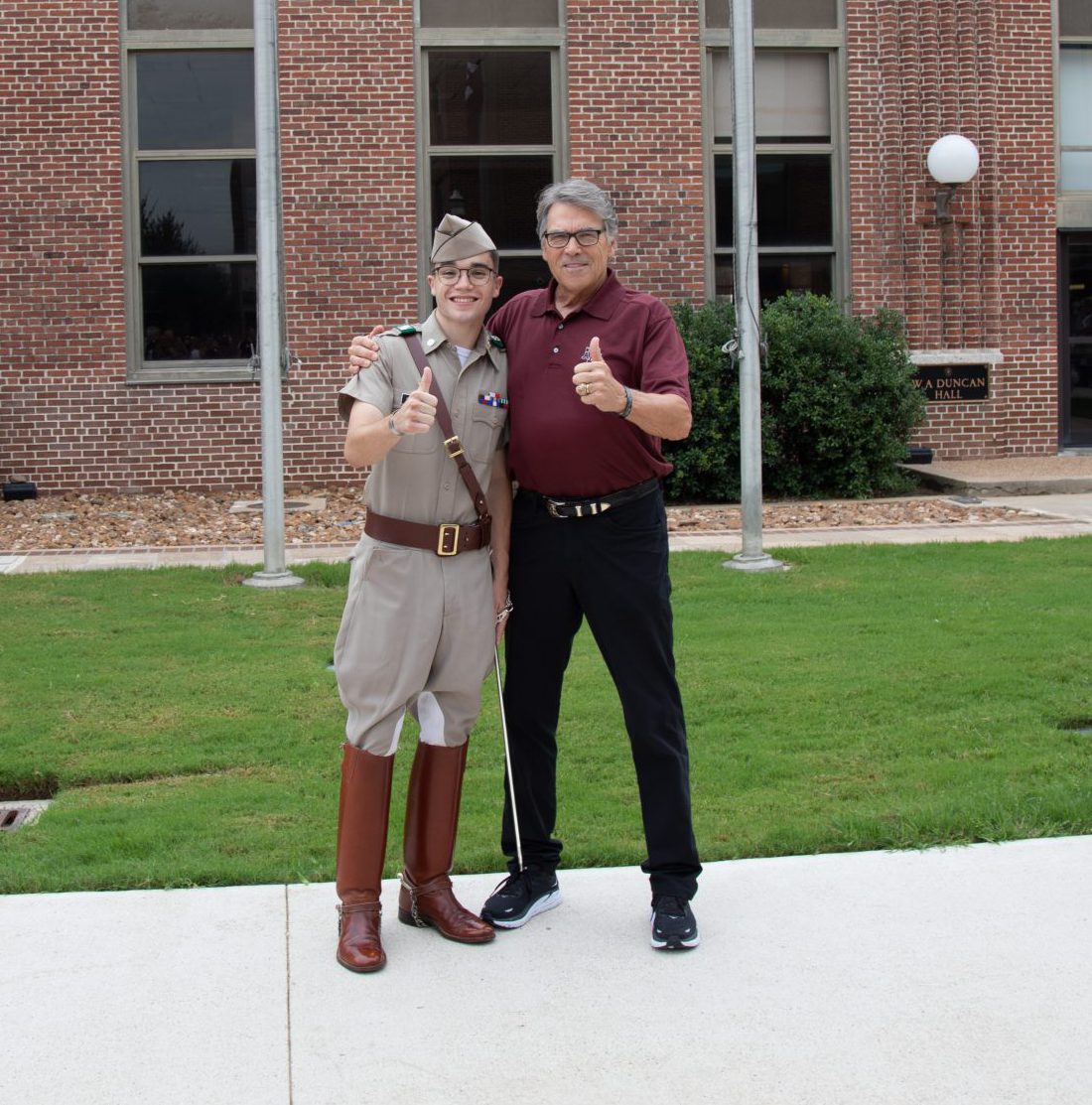 As a member of Company D-1 in the Corps of Cadets, Jake Worrell ‘23 has dreamed of donning the Corps’ coveted senior boots since he was a child.

“Growing up, I always saw my dad’s senior boots in a display case, so I knew that what they symbolized was the real deal. They’re a symbol of everything and everyone that the Corps represents,” Jake explained.

While the first march-in of the season is always a momentous time for every member of the Corps, this past Saturday was extra special for Jake.

“When my dad was in college here, as a cadet in L-1, class of 1994, he worked for the Board of Regents and actually drove Governor Perry to a game, and then back to the airport once it was over. My dad was killed in Iraq in 2006 and Governor Perry attended his funeral. He called my family and I just about every month after that to check in on us. He’s always told me to give him a call when I was a senior in the Corps so I could wear his boots to a game. It’s really cool to see this actually happen,” Jake said of the experience.

An iconic part of every senior cadet’s uniform, Jake spoke to the importance of what wearing his boots means to him.

“Wearing my senior boots has made everything up to this point worth it. It is a really nice reward. The pressure is on to do a great job at being a leader when I’m wearing them.”

When asked what wearing former Governor Perry’s boots meant to him, Jake was quick to highlight the significance of what these boots in particular symbolize.

“Governor Perry has done so much for my family and I, in addition to the state of Texas, Texas A&M, and our nation. Being able to have the privilege of wearing these 50 year old boots, representing him and everything he stands for, is so special to me. It is an honor more than anything, being able to literally walk in his shoes. My brother, Luke, is a fish in Company L-1 this year, so I am looking forward to him having this same opportunity in a few years.”

With the promise to his father, Major Matthew Worrell ‘94, United States Army, of being a member of the Corps of Cadets fulfilled, Jake is able to take a look back on what his time as a cadet has meant to him.

“Being a cadet, I feel like I represent the university in a very significant way. Not a lot of schools have a huge organization that’s as nationally known as the Corps. It is cool to be a part of something that’s been around for so long, carrying on old legacies and traditions, being a Guardian of Tradition and Keeper of the Spirit. Being those two things is very serious to me, and being able to exemplify those things everyday is something that I really wanted to immerse myself in. I wanted to fulfill this promise to my dad,” Jake said.

As a University Studies Leadership major and the Public Relations and Athletics Officer for Company D-1, Jake maintains a very busy schedule and has managed to overcome many challenges throughout his college career. Most notably, Jake transferred to Texas A&M in 2020 after beginning his journey at Tarleton State University.

“Obviously, I would’ve loved to have come to A&M on my first try, but if I got the chance to go back and do it all over again, I wouldn’t change a thing. This is the path that I was supposed to take. I made some of my best friends at Tarleton State and even had some of them transfer with me into D-1. I didn’t get the “normal” Corps experience, but I get MY Corps experience, which is something I’m so grateful for. Initially, I was devastated when I didn’t get accepted into A&M. The spirit of Aggieland is real, and I’ve felt its impact throughout my whole life. There’s no way I wasn’t going to do whatever I could to get to the greatest university in the world,” Jake said.

With his senior year off to a strong start, Jake took time to reflect on why he chose to join the Corps.

“I chose to join not because I wanted to pursue a military contract, but because I wanted to be a part of something greater than myself. It is the best decision that I have ever made, looking at who I am now. It is a challenge, but is so worth it in the ways that you will grow. The bonds I have made here are incomparable to anything I’ve ever experienced in the past. It is so much fun being able to represent Texas A&M in this way.”

The Corps of Cadets is home to many outstanding individuals, and Jake Worrell is a shining example. Through years of hard work, determination, and support from his loved ones, Jake has represented Texas A&M, the Corps, and his family well in all of his endeavors. Jake’s experience at the first march-in is symbolic of the Aggie family, its commitment to supporting one another, and the strength of the Spirit of Aggieland.

In Memory of Major Matthew Worrell ‘94. 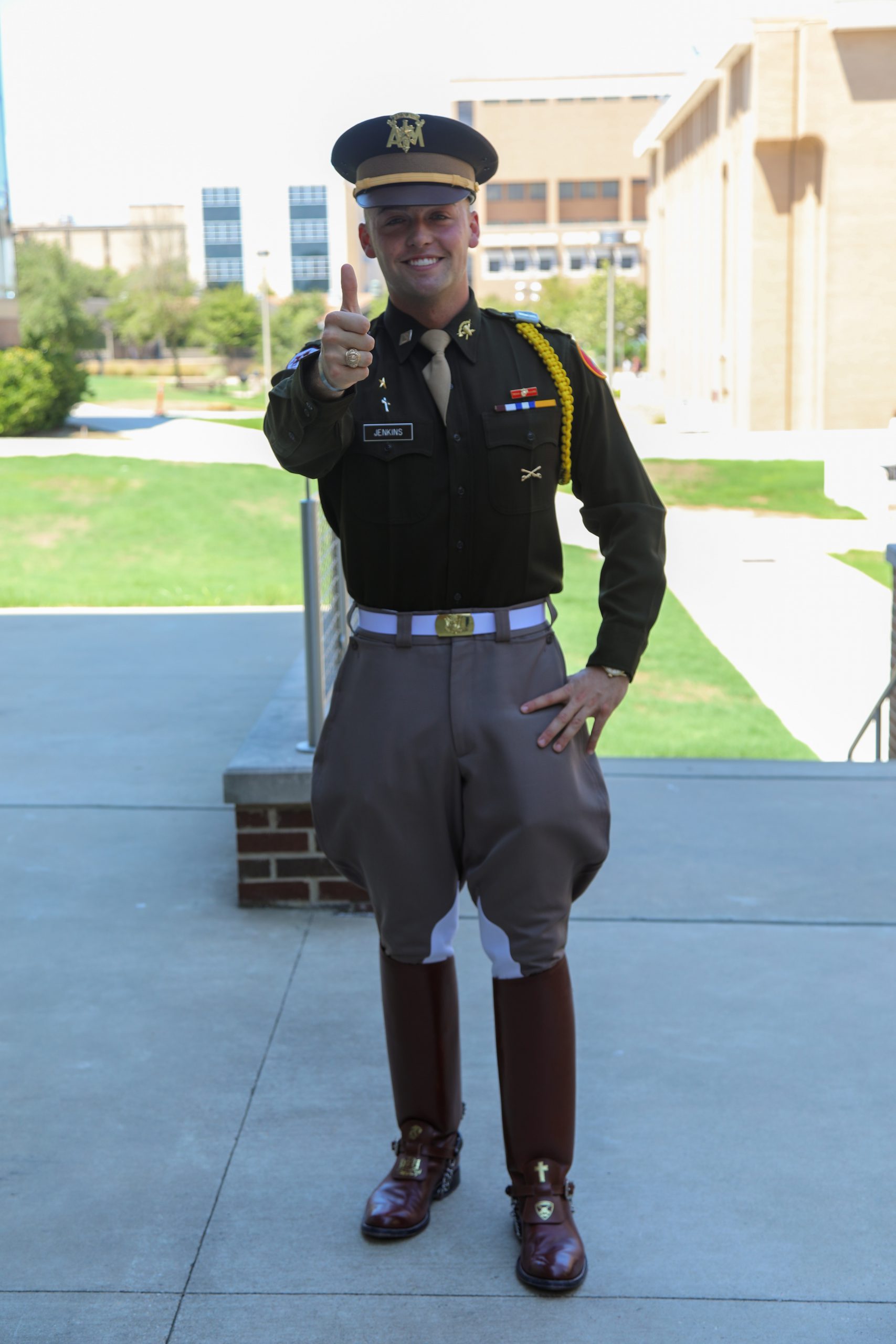 The current Commanding Officer for Parsons Mounted Cavalry, Luke Jenkins '23 is also a member of Company D-1. Outside of his involvement on the Quad, Luke is active in the MSC's Student Conference On National Affairs (SCONA).

“The Corps experience has opened up pathways to develop myself as a leader and role model. I want to be able to leave behind a legacy and a model that underclassmen can follow to improve themselves and the Corps as a whole,” Luke said.

After graduation, Luke plans to commission as a Second Lieutenant in the United States Marine Corps.