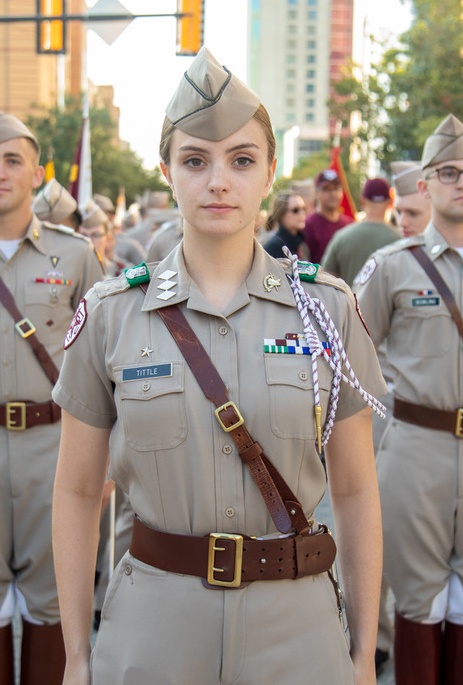 Anderson Tittle ‘22 is a Psychology major from Houston, Texas. Originally from Company A-2, Anderson currently serves as the First Brigade Major Unit Commander. As a junior, Anderson served as the First Sergeant for Company A-1. Anderson belongs to several cadet organizations including the O.R. Simpson Honor Society, a member of the Cultural Awareness and Diversity Expansion Team (C.A.D.E.T.), and serves as a School of Military Science Peer Mentor.

Off the Quad, Anderson is a member of the University Disciplinary Appeals Committee as well as a member of Progressively Reaching Excellence in Professionalism (PREP), a freshman leadership organization. Anderson also previously served as an officer in an on campus health organization. In her free time, Anderson enjoys writing, listening to music, reading, cooking, and taking long walks.

Upon graduating from Texas A&M, Anderson plans to pursue a dual-degree program that will allow her to earn both her Master of Business Administration and Juris Doctor degrees at the end of four years.

We are very proud of Anderson and the success she has had, both on and off the Quad. We look forward to seeing all that she will accomplish in the future, as we know that she will thrive in all of her future endeavors. Gig ‘Em and good luck, Anderson!