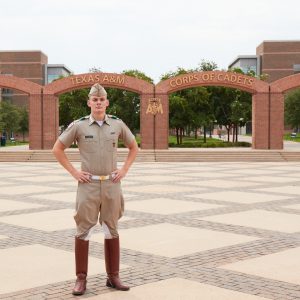 Morgan Petermann ‘21 is an Agricultural Systems Management major, Minoring in Business, from Hurst, Texas. He is the son of Sally Petermann ’82 and Thomas Petermann. Morgan is a member of Squadron 17.

Morgan has served as Athletic Sergeant for his outfit as well as the Corps Athletic Sergeant. Currently, he serves as the Executive Officer of Squadron 17. Off the Quad, Morgan has attended a nine-week discipleship and leadership project called Kaleo in Panama City Beach, Florida. He spent time as a student leader with Student Mobilization, an on-campus ministry that promotes discipleship in student organizations. The summer after his sophomore year, Morgan accepted an opportunity to return to Florida as a small group leader where he led two college students through Biblical discussions, evangelism training, and attended various leadership seminars with other small group leaders.

After he graduates in December 2021, Morgan hopes to continue to impact the lives of others in the workforce with the skills he’s gained from his time as a student and cadet. We are proud of Morgan and wish him the best of luck!! Gig ‘em, and God Bless!