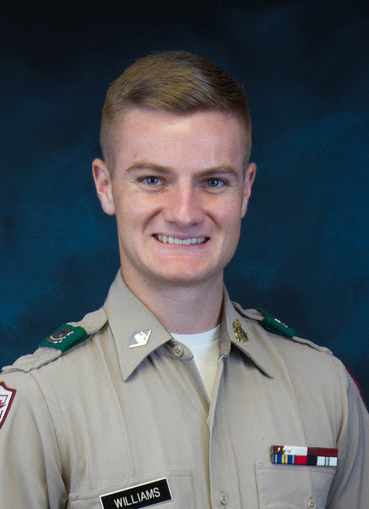 Coy M. Williams ’18 is a Civil Engineering major from Highlands Ranch, Colorado. He is the son of Janet and Mike Williams.

Throughout his four years in the Corps, Coy has been a member of Squadron 11. During his sophomore year, he served as a team leader and was a member of the Guidon family. He was also the Public Relations, Scholastics, and Career Readiness Corporal. In his junior year, Coy was a Platoon Sergeant as well as the outfit Training Sergeant. Currently, Coy is the Commanding Officer of Squadron 11.

This past summer Coy interned with Kimley-Horn, a civil engineering consulting firm, doing primarily land development work. In this internship, he worked on public and private projects, ranging from small one-acre sites and bike lanes to large 30 story apartment buildings. Coy is going back next summer for another internship and plans to work for Kimley-Horn after he graduates in December of 2018.

Coy says the best advice he received in the Corps was “days go slow, weeks sneak by you, and the months fly by.” He uses this advice to put all of his energy into each and every day. Another important lesson he learned in the Corps, is that without the support of your people, you cannot accomplish anything as a leader. Coy does his best to live by these two pieces of advice in his daily life.