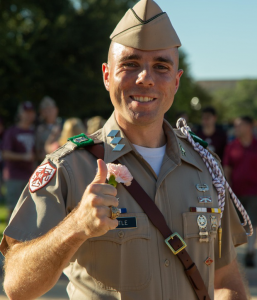 On the Quad, Brendan has been involved in a variety of activities. As a junior, Brendan served as the Sergeant Major for Second Brigade. During his sophomore year, Brendan earned the coveted Rudders Rangers pin and Brendan is currently a member of the Ross Volunteer Company. In his free time, Brendan enjoys hiking, lifting, and reading up on military history.

Upon graduating, Brendan will commission into the United States Army and plans to branch Armor.  He also plans to one day serve as a special forces officer with the Army.

We are very proud of Brendan and his accomplishments, both on and off the Quad. We look forward to seeing all that he will accomplish in the future, as we are certain that he will continue to thrive in whatever he chooses to do.  Gig’em and good luck, Brendan!