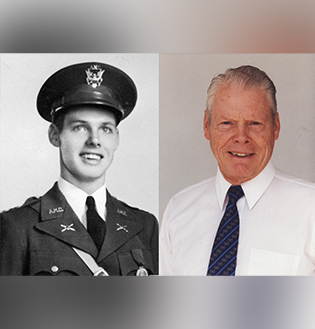 Tom Gillis received his Bachelor’s Degree in Economics from Texas A&M, became a Certified Public Accountant in 1951, and received his Doctor of Jurisprudence from South Texas College of Law in 1954. As a cadet, he was Valedictorian, served as Corps Sergeant Major and Corps Commander, and was a Ross Volunteer. Mr. Gillis was also Editor of The Battalion, Vice-President of his sophomore and junior classes and was the author of The Cadence – the manual of traditions utilized by members of the Corps of Cadets.

After graduating in 1942, he was an anti-aircraft artillery officer assigned to Boeing field, and later became part of General Patton’s 3rd Army staff, rising to the rank of Major at age 26.

Mr. Gillis became a CPA, practicing with the predecessor firm to Ernst & Young, and also practiced as an attorney with the predecessor of the current Locke, Lord, Bissell & Liddell firm. In 1958 he founded Best Industries, Inc., an oil tool manufacturer, which he sold in 1978 to Varco International.

A highly respected entrepreneur and author of Guts and Borrowed Money, he went on to teach entrepreneurship at the University of Houston for many years. Mr. Gillis also taught around the world, including Turkey, Austria, Russia, Uzbekistan, and Semester at Sea.