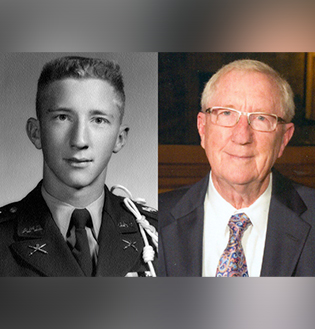 Rod Stepp received his Bachelor’s Degree in Geological Engineering from Texas A&M. As a cadet, Stepp was a member of Battery B Field Artillery, a Ross Volunteer and served on 1st Battalion/2nd Regiment Staffs. He also served as the 1959 Aggieland Yearbook Editor.

Stepp began his career with Pan American Petroleum after graduation.  In 1961 Stepp was called to service with the U.S. Army, where he served until 1963. After leaving the service, he purchased interest in a small family-owned metal shop in Fort Worth. Under his business expertise, M&M Manufacturing Company has grown to become a major manufacturer of construction-related products with six manufacturing plants and over 700 employees.

Stepp received The Association of Former Students Distinguished Alumnus Award in 2007. He served as a member of the Aggie Spirit Council, the Vision 2020 Council and the One Spirit One Vision campaign. He has also served as Vice President of The Association of Former Students, President of the 12th Man Foundation, as member and Chairman of the Board of Trustees of the Texas A&M Foundation and as a member of the President’s Board of Visitors. In 2012 Stepp was presented the Lifetime Achievement Award by the Fort Worth/Tarrant County A&M Club.