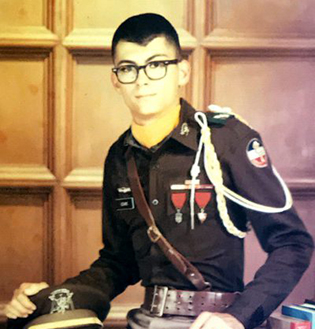 Mr. Ronald L. Adams ’70 received his B.S. in Mechanical Engineering from Texas A&M and graduated cum laude with his J.D. from Baylor University School of Law in 1975. As a Cadet, he was a member of Company C-2, Sergeant Major and Commanding Officer of the 3rd Battalion, and a Ross Volunteer. He was also elected Sophomore Class President, involved in many MSC activities, and a member of the Student Senate. After serving in the U.S. Army (Air Defense Artillery), Mr. Adams worked as a briefing attorney for the Honorable Price Daniel, Sr., Justice of the Supreme Court of Texas. He has practiced law in Fort Worth since 1976, where he served as President of Brackett & Ellis, P.C. for over 20 years. Mr. Adams was Co-Class Agent for the Class of ’70 for several terms; served as President of the Rotary Club of Fort Worth East; was ordained a Deacon at Broadway Baptist Church; and, along with wife, Pat, was named 2017 Distinguished Friend of Grapevine-Colleyville Independent School District. Mr. Adams is a longtime member of the Texas Aggie Corps of Cadets Association.