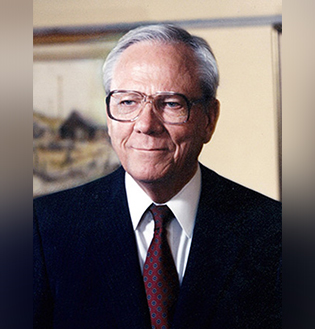 J. Wayne Stark received his Bachelor’s Degree in History from the Agricultural and Mechanical College of Texas. While at A&M, Stark was on the Coastal Artillery Corps Regimental Staff, was Associate Editor of The Battalion, Club Editor of the Longhorn yearbook and was a member of the Ross Volunteers, the Glee Club and the Biology Club. He attended the University of Texas Law School withdrawing to serve as an Army officer in World War II and then working for the Anderson Clayton Corporation, a cotton handling and distribution company.

He returned to campus in 1947 to oversee construction of the Memorial Student Center (MSC) and played a major role in developing such programs as the Opera and Performing Arts Society (OPAS), the Student Conference on National Affairs (SCONA) and the Great Issues and Political Forum programs.

In 1959, Mr. Stark, who served as mentor to thousands of young Aggies, became the sponsor for Experiment in International Living, a program enabling students to travel overseas to live and work. In 1980, after 33 years of serving as the MSC director, he retired and was named Director Emeritus and continued to serve the University for a decade as special assistant to the President. He solicited gifts and endowments for Texas A&M and the MSC and increased the number of pieces in the University Art Collections.

Aside from his involvement with Texas A&M, Stark was also actively involved in arts and civic activities in Bryan/College Station and across the state. He was awarded both the Distinguished Alumnus Award and the Distinguished Achievement Award for Individual Student Relationships from The Association of Former Students. The J. Wayne Stark Galleries in the MSC is named in his honor.