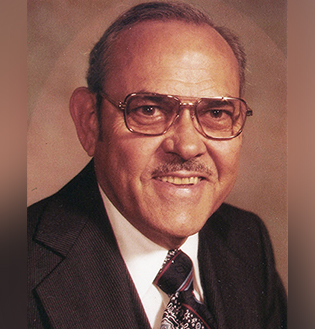 George Linskie studied Mechanical Engineering at the Agricultural and Mechanical College of Texas. As a cadet, Mr. Linskie was a member of the Aggie Band and the Aggieland Orchestra.

An engineer-in-training for General Motors after leaving college, he was the youngest member of a team that designed and installed the first air conditioning system on a bus. Mr. Linskie worked as a mechanical engineer for Frigidaire Air Conditioning Division and Rollins and Forest Consulting Engineers before serving as head of the military projects division for the U.S. Army Corps of Engineers. In the latter capacity, he helped install the largest air conditioning system in the country at a Fort Worth bomber plant.

In 1950, after serving as vice president of the Dallas mechanical contracting firm, Farwell Company, he founded the George Linskie Company, Inc. In 1970, the Linskie Company merged with the Sam P. Wallace Company as the Dallas operating division of the world’s largest mechanical contractor, where he served on the board for over 20 years. Mr. Linskie was a founding member and past president of the Engineers Club of Dallas, served as a Director on the Board of the State Fair of Texas and served as President and Chairman of the Board of the Children’s Medical Center of Dallas. He has a love of flying and held an active commercial pilot’s license for over 40 years.