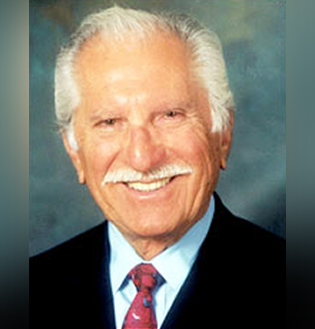 Michel T. Halbouty ’30 received a Bachelor of Science degree in Geology and a Master’s degree in Petroleum/Geological Engineering from Texas A&M.

He was also the first recipient of a Professional Geological Engineering degree in 1956 from Texas A&M, and a Doctor of Engineering (Honoris Causa) in 1966 from the Montana College of Mineral Science and Technology.

Recognized in the oil industry as one of the outstanding geologists and petroleum engineers in the United States, he was internationally renowned for his scientific ability in petroleum exploration.

The Department of Geology and Geophysics is housed in the 76,000 square-foot Michel T. Halbouty ’30 Geosciences Building complex, named in his honor.

Mr. Halbouty endowed two chairs in the College of Geosciences and many scholarships, which have provided, to-date, funding for more than 120 graduate students in the fields of petroleum geology and petroleum engineering.