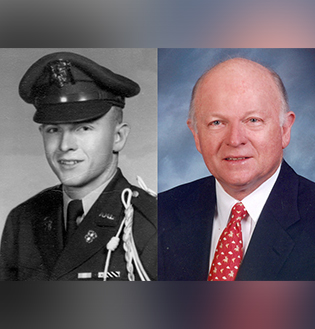 Upon completion of his master’s degree, Glasscock entered active duty with the U.S. Air Force and served as a Lieutenant. During his service from 1961-1964, Glasscock served as a Project Officer in the Rocket Propulsion Laboratory at Edwards Air Force Base.

After leaving the military, Glasscock began his career at Mobil Chemical Company and later Texas Olefins Company. In 1980 Glasscock and his wife, Susie, founded Texas Aromatics, Inc., where he serves as President and Chief Executive Officer.

Glasscock established the Melbern G. Glasscock Center for Humanities Research within the Texas A&M Liberal Arts Department, whose dedication is to foster and celebrate the humanities and its research. He was Vice Chair of the One Spirit One Vision Campaign, and an ardent supporter of the College of Liberal Arts. Glasscock has also served on the Texas A&M Foundation Board of Trustees.