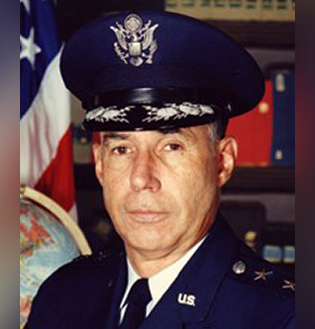 General Darling received his Bachelor of Science degree in Agriculture from Texas A&M, graduating as a Distinguished Air Force ROTC student. As a cadet, he played on the freshman and varsity basketball teams.

He logged over 7,000 flying hours as a command pilot and over 500 B-52 combat hours in Vietnam. General Darling assumed duties as Chief of Staff for Atlantic Command in June 1986 and was assigned concurrent responsibilities as Deputy Commander in Chief in September 1986.

Retiring from active duty in 1987, he returned to Texas A&M as Commandant of the Corps Cadets, emphasizing academic excellence by hiring an academic counselor, creating a learning center and establishing the Commandant’s Honor Roll.

In 1996, he received the Texas A&M President’s Achievement Medal and was designated Commandant Emeritus by The Texas A&M University System Board of Regents. In a third successful career, he became
a major university fund raiser. As Executive Director of Corps Development, he was instrumental in raising money for Corps programs and raising the number of Corps scholarships to over 1,000.