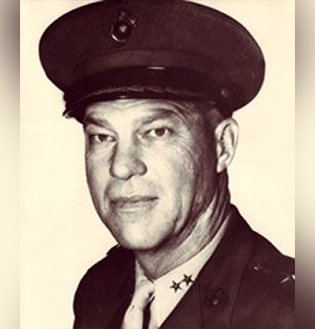 A veteran of three wars and numerous combat campaigns, during his 33 years of service as a Marine Corps officer, Officer Murray earned a reputation as an exemplary combat leader. Serving first in Shanghai during the Sino-Japanese War in 1937, he later led Marines in World War II Pacific campaigns at Guadalcanal, Tarawa and Saipan. Author Leon Uris served as a communications specialist in Murray’s WWII battalion and used his experiences there as the basis for his best-selling 1953 novel Battle Cry, which subsequently became a motion picture screenplay. In both works, Officer Murray was the model for Uris’ hard-charging Marine battalion commander, Lt. Col. Sam “High Pockets” Huxley.

In the Korean War, he led the 5th Marines in the landings at Pusan and Inchon and in the Chosin Reservoir campaign. He also served as deputy commander for all Marine forces in Vietnam. His personal bravery and leadership earned him two Navy Crosses, four Silver Star Medals for valor and a Purple Heart for two wounds sustained in combat. He retired from active duty in 1968.