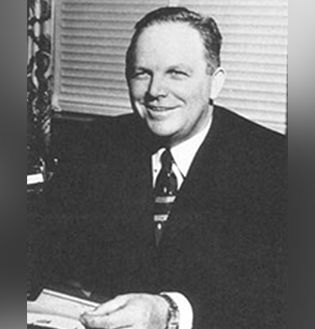 After graduation from Texas A&M, Rudder had been commissioned a second lieutenant of infantry in the United States Army Reserve. Called to active duty in 1941, Rudder took part in the D-Day landings as Commanding Officer of the United States Army’s 2nd Ranger Battalion. His U.S. Army Rangers stormed the beach at Pointe du Hoc, scaling 100-foot (30 meter) cliffs under enemy fire to reach and destroy German gun batteries. The battalion’s casualty rate for this perilous mission was greater than 50 percent. Rudder himself was wounded twice during the course of the fighting. In spite of this, they dug in and fought off German counter-attacks for two days until relieved. He and his men helped to successfully establish a beachhead for the Allied forces.

Seven months later, Rudder was assigned to command the 109th Infantry Regiment, which saw key service in the Battle of the Bulge. Rudder earned military honors including the Distinguished Service Cross, Legion of Merit, Silver Star, Bronze Star with Oak Leaf Cluster, Purple Heart with Oak Leaf Cluster, French Legion of Honor with Croix de Guerre and Palm, and Order of Leopold (Belgium) with Croix de Guerre and Palm. He was a full Colonel by the war’s end and was promoted to Brigadier General of the United States Army Reserves in 1954 and Major General in 1957.

He returned from the war to serve as mayor of Brady Texas. Rudder won the 1956 state land commissioner election and became vice president of Texas A&M University in 1958. Rudder became president in 1959 and president of the entire A&M System from 1965 to his death in 1970. In 1967 President Lyndon B. Johnson presented him with the Distinguished Service Medal, the highest peacetime service award. Since his death in 1970, an annual service has been held in Normandy, France, in his honor.

While president of Texas A&M, Rudder is credited for transforming the University from a small land-grant college to a renowned university. Specifically, he made membership in the Corps of Cadets optional, allowed women to attend, and led efforts to integrate the campus. While the changes were hugely unpopular to the former students (it has been said only a president with Rudder’s heroic military record could pull off such drastic changes), there is no doubt these changes freed Texas A&M to become one of the largest universities in the U.S. There are many reminders of Rudder on campus, including Rudder Tower, next to the Memorial Student Center. A special training unit within the Corps of Cadets known as “Rudder’s Rangers” is named in his honor.