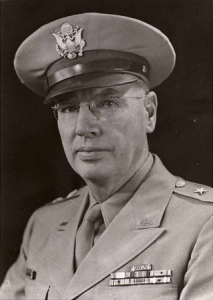 General Moore received his Bachelor’s Degree in Civil Engineering from Texas A&M and was commissioned into the Coast Artillery Corps in 1909. While at A&M, he lettered in football, was a Ross Volunteer and “T” Association member.

He served as a Major and Lieutenant Colonel during World War I before returning to Texas A&M to become Commandant of Cadets from 1937–1940, where he was promoted to Colonel. He played a significant role in constructing the 12 – dormitory Quadrangle and dining hall that became home to the Corps.

In World War II, then Brigadier General Moore fought in the Bataan Campaign, later becoming the commander of the Harbor Defenses of Manila and Subic Bays, in the Philippines, at the time of the 1941 Japanese invasion.

He was given command of the Philippine Coast Artillery with roughly 5,000 men and four forts to defend Corregidor. On May 6, 1942, General Jonathan Wainwright surrendered the Corregidor garrison leading himself and General Moore to be captured by the Japanese, and held as a POW, later liberated in August 1945.

The annual Corps award for the most outstanding cadet unit proudly bears his name.