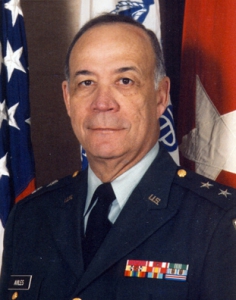 A graduate of the Army War College, he retired from the Army Reserve in 1993 as a Major General.

In 1981, he founded Avilés Engineering Corp. which has been instrumental in projects such as Houston’s Minute Maid Park, Reliant Stadium, and Bush Intercontinental Airport.

General Avilés has volunteered his time to Texas A&M, serving on the Texas A&M University System Board of Regents, Corps of Cadets Development Council, the Texas A&M Hispanic Network and the President’s Board of Visitors. He was awarded with The Association of Former Students Distinguished Alumni Award.

His many public service commitments extended to the local, state, and national levels, and include professional, charitable, cultural, and educational organizations and federal agencies.