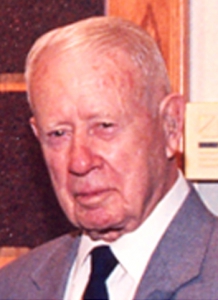 Major General Luedecke, a command pilot, reached the rank of brigadier general at age 33. He retired from the U.S. Air Force in 1958, after 24 years of active duty.

He served as general manager of the Atomic Energy Commission for six years and as general manager and deputy director of the Jet Propulsion Laboratory for three years. At Texas A&M, he was associate dean of engineering, university research coordinator and executive vice president.

Upon the death of president J. Earl Rudder, he served as acting president and chancellor of the Texas A&M University Systems. Major General Luedecke was awarded an honorary doctor of laws degree by Texas A&M in 1946, and he was named a distinguished alumnus in 1967. The building housing Texas A&M’s cyclotron was named in his honor on September 10, 1994.