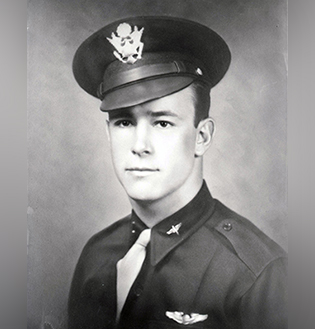 Lloyd “Pete” Hughes studied Petroleum Engineering at the Agricultural & Mechanical College of Texas, where he was a member of Company G, Infantry.

During Operation Tidal Wave, 178 B-24 Liberator heavy bombers took off on an 18-hour, 2,400-mile round-trip mission to destroy the largest of the Nazi-held oil refineries at Ploieşti, Romania. Flying through intense anti-aircraft fire, the plane was severely damaged, leaking gas from the bomb bay and left wing tanks.

Instead of attempting a forced landing of his damaged aircraft before reaching the target area, Lieutenant Hughes elected to continue on, rather than jeopardize the success of the mission. He flew into a wall of fire at 30 feet above the ground and dropped his bomb load with precision. After completing his bomb run, his aircraft cartwheeled into the ground. Of the ten-man crew, Lieutenant Hughes and six others were killed on August 1, 1943. Of the survivors, one died of his wounds and two became prisoners of war.

Lieutenant Hughes was the first Texas Aggie awarded the Medal of Honor.