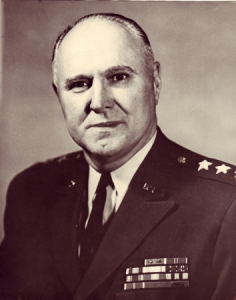 General Colglazier attained the highest rank ever held by a reserve officer on active duty with the U.S. Army. Commissioned upon graduation from Texas A&M with a degree in civil engineering in 1925, he worked for his father’s construction company and later for the Works Progress Administration during the Depression.

He was called into active duty in 1941 and rose to the rank of colonel serving in Ireland, England, Africa Italy and France. He was recalled to active duty in 1951 during the Korean Conflict. Subsequently he served as the Army’s assistant deputy chief of staff for logistics. He also served as the commander of the U.S. Army Europe’s communications zone. When he retired in 1966, he commanded the Fourth Army, had over 40 years of commissioned service and was considered of the world’s foremost authorities on logistics.

His personal decorations included the Distinguished Service Metal, Legion of Merit, Bronze Star, Army Commendation Medal, honorary officer of the Most Excellent Order of the British Empire, French Legion of Honor and Croix de Guerre. He served as councilman-at-large for the Association of Former Students and was named a Distinguished Alumnus in 1971. He Donated his time and support to Texas A&M until his death in 1993.