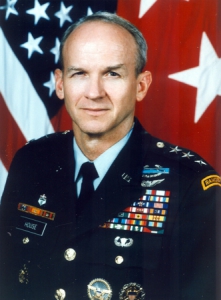 General House epitomizes the core values of leadership and commitment to service evident in the Corps of Cadets.

A distinguished military student, he earned a degree in Agriculture and an Army commission. He received his masters degree from Clemson University.

In nearly 33 years of service, General House commanded during peace and wartime at every level from infantry platoon commander through Deputy Commander in Chief and Chief of Staff of the U.S. Pacific Command, retiring in 2000.

Former member of the Board of Directors of USAA, General House has been a member of the Corps Development Council, Corps of Cadets Association, The Association of Former Students and President’s Council.