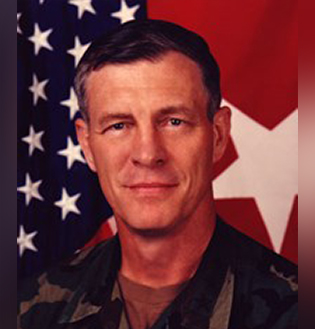 General Leonard Holder served with distinction during a military career spanning over 30 years.

General Holder served as a cavalry troop commander in Vietnam, as Commander of the Second Armored Cavalry Regiment in Desert Storm, and as Commanding General, 3rd Infantry Division during various peacekeeping operations.

Prior to retiring in 1997, General Holder served as Commanding General of the Combined Arms Center and Commandant of the Command and General Staff College. His publications continue to influence Army doctrine, providing a vision for the Army of the 21st century.

His military decorations include two Distinguished Service medals, a Bronze Star, the German Cross of Honor, and the Russian Medal for Military Excellence.