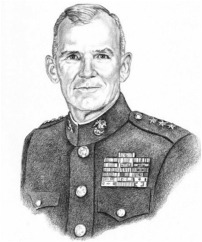 Lieutenant General John H. Miller ’46 entered Texas A&M as a member of A Infantry. Enlisting in the Marine Corps in May 1943, he participated in the battle of Okinawa before returning to A&M to receive his B.S. in Electrical Engineering. Miller served in Korea, then attended Naval Postgraduate School earning his M.S. in Engineering Electronics. He then transferred to Camp Lejeune, NC, where he served as Commanding Officer. Ordered to Vietnam, he was reassigned to Okinawa where he became Chief of Staff at Camp Butler. He also served as Commanding General, Marine Corps Development and Education Command at Quantico, VA, and Commanding General, Fleet Marine Force, Atlantic, Norfolk, VA. Lt. General Miller received the Navy Distinguished Service Medal, the Legion of Merit with Combat “V” and gold star in lieu of second award, two Bronze Star Medals, and three Purple Heart Medals along with other decorations he received for service in World War II, Korea, and Vietnam.