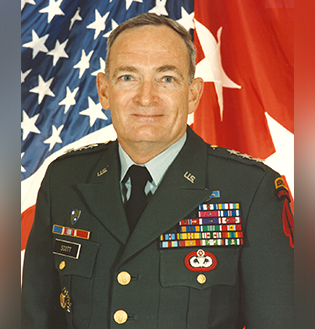 Throughout his 32-year military career in the United States Army, he held several key senior commands in Europe, Africa, Korea and the United States and participated in operations in Somalia, Haiti and the Balkans as well as in counter-terrorism and counter-narcotics missions worldwide.

General Scott’s military experience includes command of tactical units at all levels, from platoon through division. Some of his key staff assignments include service with the West Point faculty; speech writer and editor in the Office of the Chief of Staff and Deputy for Plans and Policy, United States Pacific Command.

He served in six foreign countries and participated in five combat tours, three of which were in Vietnam where he served as an infantry platoon leader, company commander and operations officer.

From 1997 through 2001, General Scott was the director of the National Security Program at the John F. Kennedy School of Government, Harvard University where he taught graduate- and executive-level programs on national security matters and issues. He remains a member of several Harvard affiliated national security study groups and committees, including the Executive Committee on Domestic Preparedness.

General Scott currently serves as chairman of the Veterans’ Disability Benefits Commission; is a partner at Watson & Associates, a financial services firm located in Coleman, Texas; and teaches political science at Howard Payne University in Brownwood, Texas. He is also a member of the board of directors of the Calibre Corporation, a technical services company based in Alexandria, Virginia.

During his service, the Army honored General Scott with five military awards for valor and two Purple Hearts for wounds received in combat. He is a qualified combat infantryman, master parachutist and Army Ranger.