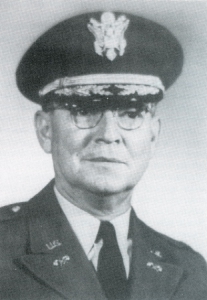 Colonel Adams was director of the Fightin’ Texas Aggie Band from 1946 to 1973, longer than any other individual. Under Adams, the Aggie Band became one of Texas A&M’s most loved and enduring symbols—the most highly respected military marching band in the world.

After serving his country in World War II, he returned to Texas A&M . Under his direction, the Aggie Band grew from fewer than 100 members to 225. He created maneuvers other band directors called “impossible,” including the crisscross that he introduced on Thanksgiving Day in 1947. He gave the Aggie Band its style, its look and its dedication to discipline, honor and duty. Colonel Adams retired in 1973 with 209 consecutive halftime victories.