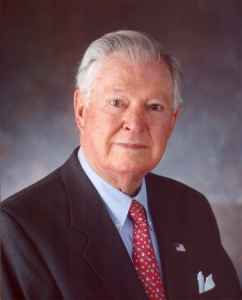 John Lindsey received his Bachelor’s Degree in Economics from Texas A&M. Called to active duty in 1943, he served as an Army officer in both Europe and the Pacific, completing his degree in 1947.

After graduation, he formed Lindsey Insurance Agency with his father and was a founding director and member of the Executive Committee of Southern National Bank.

A key Player in the “Capturing the Spirit” and “One Spirit One Vision” capital campaigns, Lindsey has funded numerous faculty chairs and scholarships. In 1978, he was named a Distinguished Alumnus and was the first recipient of the 12th Man Award. In addition to ceaseless efforts on behalf of A&M, he is also a champion of the arts, education, community, and military.