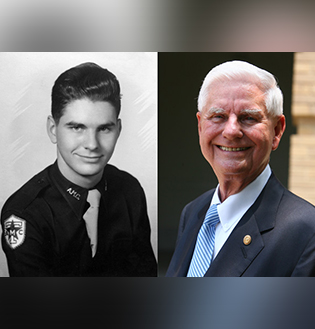 Doug Pitcock received his Bachelor’s Degree in Civil Engineering from Texas A&M. As a cadet, Pitcock was a member of Company A Composite.

Pitcock began his professional career in 1950 as an estimator for Farnsworth & Chambers in Houston. He then served as a First Lieutenant in the U.S. Army for two years and by 1955, he was co-founder, partner, president and CEO of Williams Brothers Construction.

In 1976 Pitcock was appointed by President Gerald R. Ford to the National Transportation Policy Study Commission, and served as national president of Associated General Contractors of America in 1984. Pitcock was inducted into the Texas Transportation Institute’s Hall of Honor in 2005 and was honored as the “Houston Engineer of the Year” in 2006. He was named one of the “Top 100 Construction Professionals of the 20th Century” by the American Road & Transportation Builders Association.

Pitcock has funded numerous fellowships and research projects at Texas A&M, established several Corps scholarships, and provided operational funds for the Hollingsworth Leadership Excellence Program. He has been honored as a Distinguished Graduate of Texas A&M’s Department of Civil Engineering, an Outstanding Alumnus of the Dwight Look College of Engineering and The Association of Former Students Distinguished Alumnus in 2008.