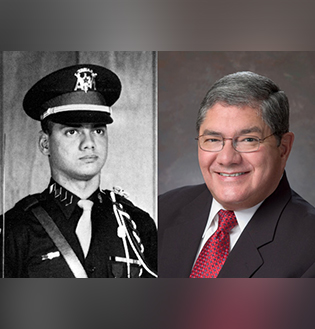 Hector Gutierrez received his Bachelor’s Degree in Mathematics from Texas A&M. As a cadet, Gutierrez was a member of Squadron 9 and the Ross Volunteers. He served as Corps Commander, was President of the University Honor Council and was an active member of Town Hall and the Student Conference on National Affairs.

Gutierrez served five years in the U.S. Air Force and 16 in the Reserves reaching the rank of Lieutenant Colonel. Before his retirement, he was the owner of Hector Gutierrez Consulting, a public relations and communications firm.