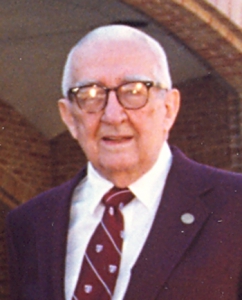 One of Texas’ most distinguished businessmen, H. R. “Bum” Bright has always had time for Texas A&M. Graduating with a petroleum engineering degree, he served as a Captain in the Corps of Engineers during World War II.

He leads Bright & Company, which consists of some 150 businesses in the oil and gas, trucking, real estate, insurance and banking industries. He also has served on the boards of numerous other firms and civic groups and was principal owner of the Dallas Cowboys professional football team.

A former chairman of Texas A&M ‘s Board of Regents and a Distinguished Alumnus, the San Antonio Express News called him an “Aggie’s Aggie…known for his love and support for his alma mater.” The athletic complex on the Texas A&M main campus is named in his honor. He was named a distinguished Alumnus in 1991.