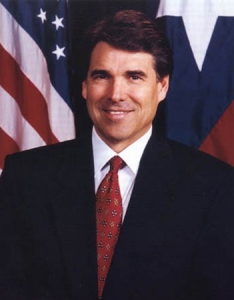 Governor Perry received his Bachelor of Science degree in Animal Science from Texas A&M. He was commissioned a 2nd Lieutenant in the US Air Force upon graduation.

He was a member of Squadron 6 and served as a junior and senior Yell Leader and was immersed in all aspects of Aggie student life.

Returning to Texas after his military service, Governor Perry continued the family farming and ranching business in West Texas. His service to the State of Texas has varied as he served in the Texas House of Representatives from 1984 to 1990 and was elected in 1990 to Texas Commissioner of Agriculture. In 1998, he was elected Lieutenant Governor of Texas, and became Governor in December 2000.

The first Aggie Governor of Texas, Rick Perry has dedicated his life to his state and nation.

Governor Perry was awarded The Association of Former Students Distinguished Alumnus Award in 2002.