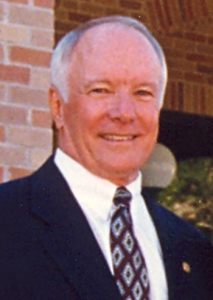 Gerry Griffin led America’s journey to the heavens. Graduating with an aerospace engineering degree, he served as an Air Force fighter interceptor weapons officer, then worked in the aerospace industry. He next began a 21 year career with NASA, which took him to the apex of America’s space program.

He subsequently became President of the Greater Houston Chamber of Commerce, now the Greater Houston Partnership, and Chairman of Comarco, Inc. Despite numerous civic and professional commitments, he worked hard to develop Texas A&M’s athletic and Corps of Cadets programs, and in 1985 was named a Distinguished Alumnus.