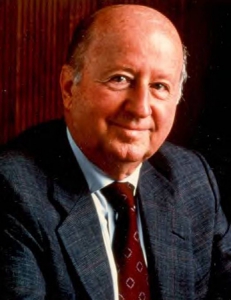 George Mitchell received his Bachelor’s Degree in Petroleum Engineering from Texas A&M in 1940. He graduated as a Distinguished Student, lettered three years in tennis and served as a battalion commander. Mr. Mitchell served as an Army officer in World War II.

Nationally prominent in land development and oil and gas exploration, he was one of Texas A&M’s foremost benefactors. In 1968, he donated 100 acres of land on Pelican Island in Galveston for creation of a new campus for marine related programs.

The Mitchell Campus, named in honor of his parents, the late Mr. and Mrs. Mike Mitchell, now serves as headquarters for the University’s fast-growing Moody College of Marine College of Marine Sciences and Maritime Resources. He subsequently has given the University additional Galveston property, including a facility on Eckert’s bayou which will be used as a marine research station. He served as board chairman and president of Mitchell Energy & Development Corporation based in Houston.

His firm, developed in The Woodlands, ranks among the nation’s largest independent oil and gas producers and is credited with the discovery of nearly 100 oil fields and 125 gas fields. He has served as chairman of the 4,000 member Texas Independent Producers and Royalty Owners Association.

Mr. Mitchell has also funded numerous other sports and research projects at Texas A&M including the Institute for Fundamental Physics and tennis center. He is a Distinguished Alumnus of Texas A&M and is recognized for his success in the corporate sector and for enriching society.