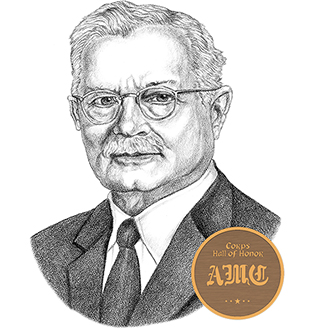 Frederick Giesecke was born in Latium, TX, on January 28, 1869. He came to A&M College at the age of 14 and graduated in 1886. He was Company A Commander, Corps Commander, and received medals in physics and mathematics classes. Two years after graduation, he became an assistant professor of drawing. By 1888, he was the head of the Drawing Department, and in 1904, served as the head of the Architecture Department. From August to October 1890, serving as a civilian, Giesecke became the first former Cadet to become Commandant. He designed and/or supervised construction of Sbisa, the Academic Building, Cushing Library, the Systems Administration Building, Hart and Walton Halls, and many other buildings on campus. In 1912, he set up the School of Architecture for the University of Texas, but returned to A&M College in 1927 and resumed his role as college architect and Dean of the School of Architecture. He also drafted the constitution for the Alumni Association of the Agricultural and Mechanical College of Texas (Ex-Cadets Association), the precursor to the Association of Former Students.