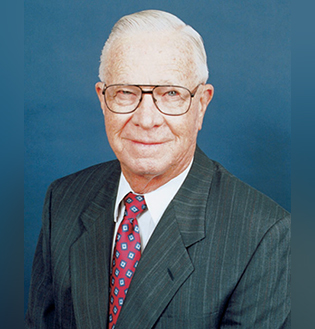 While a student, he was a varsity letterman in swimming, a member of the Corps of Cadets and honored as a Distinguished Military Student. Shortly after graduation, Mr. Kruse joined family-owned Blue Bell Creameries, Inc.

Mr. Kruse’s 50-plus years of service have included positions of General Manager, President, and Chief Executive Officer, and since 1993, Chairman of the Board. His oversight and management of the sales division was instrumental in building Blue Bell into the number three ice cream brand in the country.

Texas A&M recognized Mr. Kruse with the College of Agriculture and Life Science Outstanding Alumni Award in 2002 and induction into the Corps of Cadets Hall of Honor in 2003. He has provided students the valuable resources of Blue Bell to enhance their educational opportunities.

He is an ardent supporter of the College of Agriculture and Life Science, the Corps of Cadets, and the George Bush School of Government and Public Service. Born in Brenham, Texas, Mr. Kruse and his wife, Evelyn, have four children, Karen ’73, Ken ’75 (deceased), Paul ’77, and Neil ’80 (deceased).