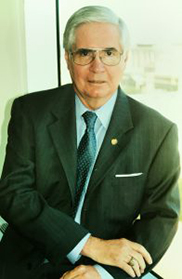 Dr. J. Malon Southerland ’65 graduated from Texas A&M with a B.B.A. in Management. He was a member of F2, G-3, A-3, and the Fish Drill Team. After active duty in the U.S. Army he returned to A&M in 1968 as a counselor in the Commandant’s office. After completion of his M.A. (1974) and Ph.D. (1980), both in Education Administration, he was Assistant to the President of Texas A&M followed by Associate Vice President for Student Services. In 1986, he became Interim Commandant of Cadets. Southerland was named Vice President of Student Affairs from 1993-2003. He is a Vice President Emeritus and has served on numerous boards including Chairman of the Board of the Greater Texas Foundation and the Texas Guaranteed Student Loan Corporation. Southerland has received over 15 awards including the Buck Weirus Spirit Award, the Faculty Distinguished Achievement Award in Student Relationships, and the Goodnight Award for Outstanding Performance as a Dean from NASPA in 2003. Texas A&M and the A&M Foundation named him the namesake of the Southerland Aggie Leader Scholarships, funding over 100 student scholarships. Southerland was named an honorary member of the Ross Volunteers by the Class of ’88 and is a past AFS co-agent of the Class of ’65.