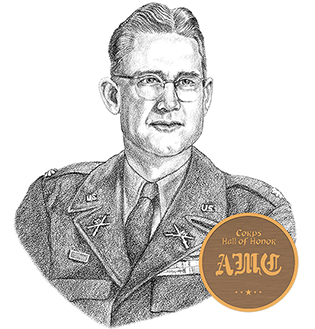 Tom C. “Ike” Morris graduated from A&M College in 1933 with a bachelor’s degree in agriculture, serving in D Company Infantry. He worked five jobs to stay in school during the depression, and Morris enjoyed track, lettering in low hurdles. He was honored to be elected as president of his senior class, and he served as chairman of the Ring Committee. Morris has many memories of his time at A&M: he remembers the first Reveille, he waited tables with Earl Rudder, he heard Pinky Downs shout out “Gig ’em!” and he was once picked up by E. King Gill while hitchhiking his way back to Aggieland. Morris fought in the 38th Infantry of the 2nd Infantry Division in World War II. He went on to land on Omaha Beach during the invasion of Normandy and, with his unit, captured Trévières—the first city liberated in France. On August 1, 2016, Morris celebrated his 106th birthday and is the world’s oldest living Aggie. He and his childhood sweetheart, Margaret C. Morris, were married for 77 years. When asked what the secret is for living a long life he simply says, “Do your best.” The spirit of Aggieland has grown and developed in ways Morris could have never guessed. “It’s part of my life,” he said.