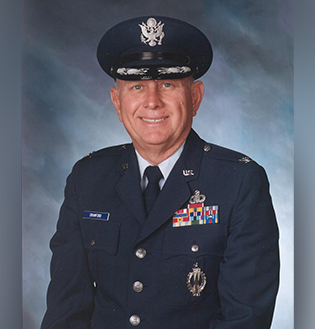 Colonel Donald Crawford received a Bachelor of Science in business management from Texas A&M. After four years on active duty in the U.S. Air Force, he served in the Air Force Reserves for 26 years in numerous command positions.

He was the owner of Southwest Shelving Company with manufacturing plants in Texas, Louisiana and New Mexico. Colonel Crawford was the regional commander of the U.S. Air Force Academy Admission program in north Texas, and the chairman of the Advisory Panel to the Director of Admission at USAFA for ten years.

In 1989, he assisted in the development of the Corps Recruiting Office and Corps Leadership Outreach Program. Colonel Crawford was instrumental in founding the Texas Aggie Corps of Cadets Association (CCA) in 1993 and currently serves as its executive director.

The CCA has grown to over 12,500 members, sponsors over 36 programs designed as quality-of-life programs for cadets, publishes a quarterly magazine, the Guidon and the Corps yearbook, the Quadrangle. The CCA maintains a database of over 46,500 former members of the Corps of Cadets and has provided over $1.5M in support for Corps programs. Crawford also serves on the Corps Development Council and the Texas A&M President’s Corps of Cadets Board of Visitors.