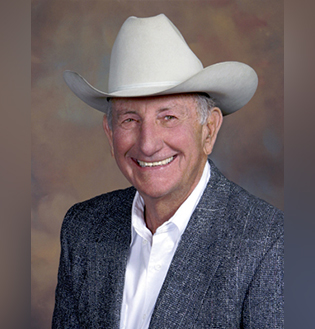 Mr. Williams received his Bachelor’s Degree in Animal Husbandry from Texas A&M. He then served two years in the U.S. Army.

In 1957 he entered the oil and gas business as an independent producer, and since that time has been active in all facets of the industry. During his business career, he has organized over 26 major entities, ranging from Clajon Gas, (now Aquila Gas Pipeline Corp.) – the largest privately owned natural gas company in Texas, and Williams Company, which has drilled more than 800 wells across the country. He also founded Clayton Desta Communications, which built the first totally digital microwave long-distance network in Texas. His farming and ranching operations encompass more than 450,000 acres of land in Texas and Wyoming.

In 1981, he was named an Association of Former Students Distinguished Alumnus. An Active supporter of Texas A&M and Corps of Cadets, the Williams Alumni Center on campus is named in his honor. A generous mentor of countless Aggies, Mr. Williams is a recipient of the Dean’s Service Award for Teaching Excellence for entrepreneurship classes he taught in the College of Business Administration.

He has contributed funds for a President’s Endowed Scholarship as well as funds for general use by the University. Mr. Williams also served on The Association of Former Students Board of Directors.