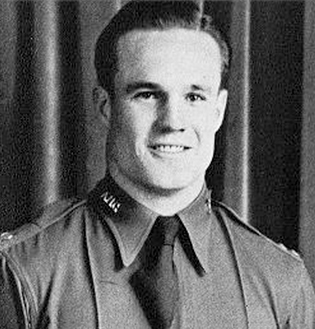 Captain Joseph Eugene “Joe” Routt ’37 was born in Chapel Hill, TX, grew up on the family farm, and was a standout athlete. After entering Texas A&M as member of the Corps of Cadets, he became a starter on the freshman football team. By his junior year, Routt was named captain of the varsity team. Very popular with the sports media, Routt was called “the toughest guy in Texas.” An agile defensive lineman, in his junior year he was the first Aggie selected as All-American and his senior year was selected as the first two-time Aggie All-American. Routt graduated in May 1938 with a degree in Animal Husbandry, and although drafted by the Cleveland Rams, he opted to stay in Texas and help on the family farm. He was called to duty and commissioned into the U.S. Army in late 1942 and following training, sent to England. By the fall of 1944, he was an Infantry Company Commander on the front lines in Belgium. After engaging the enemy in early December, he braved intense enemy fire to rally his unit in a counter-attack against an objective protected by enemy tanks. Captain Routt was killed-in-action on December 2, 1944, during the Battle of the Bulge. Awarded the Bronze Star, he is interned in Brenham, TX.