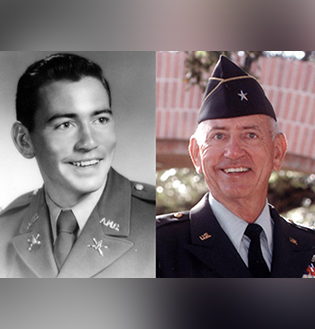 Donald Johnson received his Bachelor’s Degree in Wildlife Management from Texas A&M. As a cadet, he was a member of Company A-Anti-Aircraft Artillery.

After graduation, Johnson commissioned into the U.S. Army as an Air Defense Artillery Officer. He entered Army Aviation training in 1957 and received his aviation wings in June 1958. He served as the 3rd BDE, 4th ID Aviation Officer from Sept 1966 to July 1967 in Dau Tieng, South Vietnam. Johnson logged over 2,300 hours in fixed and rotary wing aircraft during his military career.

In 1967, Johnson returned to Texas A&M as an Army ROTC instructor from 1968 – 1972, when he left to serve a year with the Physical Evaluation Board at Valley Forge General Hospital in Phoenixville, Pennsylvania.

He returned to Texas A&M in 1973 to serve the Office of the Commandant in various positions including Assistant Commandant, Deputy Commandant, and Chief of Staff.

Johnson created the Annual Corps Scholarship Golf Tournament in 1998 and to date, the tournament has raised over $364,000 to support cadets with scholarships.