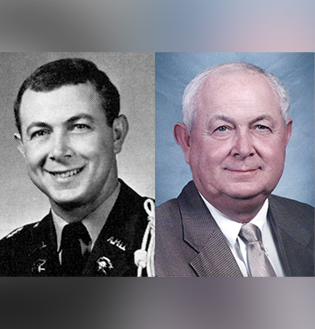 Bill Youngkin received his Bachelor’s Degree in Agricultural Education from Texas A&M and his Juris Doctorate from Baylor University. As a cadet, Youngkin was a member of Company B-2 and the Ross Volunteers, served on 2nd Brigade and 3rd Battalion Staffs, and held the positions of Class Officer and Head Yell Leader.

Youngkin served two years as an officer in the U.S. Army, first stationed with the 18th Airborne Corps at Ft. Bragg, North Carolina, and then in Vietnam.

A practicing lawyer for 38 years, Youngkin is the current owner of Youngkin & Associates PLLC in Bryan, Texas. He is a Civil Litigator and Certified Mediator and serves as a board member of the Greater Texas Foundation.

Youngkin is a Past President of both The Association of Former Students and the Former Yell Leaders Association, a Past Director of the Brazos County A&M Club and a former member of the Executive Committee of the 12th Man Foundation. Youngkin served on the Advisory Board of the Corps Development Council and was a Fish Camp namesake. He has established both 12th Man Endowed and Corps of Cadets Scholarships. Youngkin and his wife, Marilyn, were the Texas A&M Parents of the Year in 2000 – 2001.