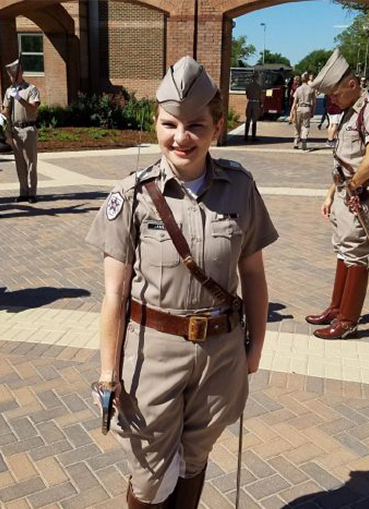 Bekah James ‘18 is a Recreation, Park and Tourism Sciences major with a minor in Horticulture from Kennesaw, Georgia. She is the daughter of Steve ‘82 and Susan James.

Bekah is the 2017-2018 Corps Public Relations Officer. During her time in Squadron 11, she served as a Squad Leader and the Operation Sergeant. She honed her event planning skills as a member of the 2016 Holiday on the Quad Committee as the Operations and Logistics Coordinator. She currently coordinates large events on the Quad and oversees Corps philanthropy work for the March of Dimes and other local community organizations.

While at Texas A&M, Bekah discovered her passion for leisure studies and floral design. She serves as a Student Representative for the Recreation, Parks and Tourism Sciences Department. In 2016, she attended the National Parks and Recreation Association Conference in St. Louis, Missouri, and competed on the Texas A&M Student Challenge team. In July 2017, Bekah represented Texas A&M at the American Institute of Floral Design Student Competition in Seattle. Bekah is also involved in Maggies, a women’s leadership organization on campus, as a member the G.L.O.W. 5K and Selections Committees.

Upon graduating in May 2018, Bekah plans to move to Nashville. She hopes to work as an event coordinator for concerts or wedding venues. She eventually plans to open her own floral coffee shop in the city.

Bekah says the best wisdom she ever received in the Corps of Cadets was “you never have to do the same day twice.” She uses this mantra to motivate herself to make the best of every day and go to sleep looking forward to the next. She also realized through the friendships she’s gained and challenges she’s faced in the Corps of Cadets that “life is short and people matter.”  Bekah is an exceptional cadet with exceptional aspirations.  She exemplifies our core values day in and day out.