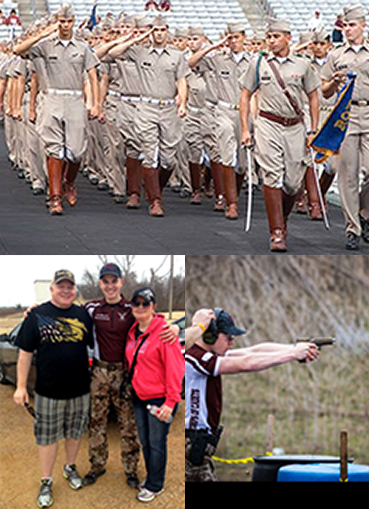 Zach Williams ’16 is an Aerospace Engineering major from Weatherford, Texas, and is the son of Stephanie and Donald Williams. He is serving as a Platoon Sergeant for Squadron 1 for the 2014 – 2015 school year.

Active within the Corps, Zach is responsible for the supervision of all Flight activities and assigned cadets in his platoon (two Squad Leaders, two Assistant Squad Leaders, four Team Leaders and eight freshman) as well as ensuring compliance with all Corps and University policies as directed by the Flight Leader. He is also the Commanding Officer of the Corps of Cadets Marksmanship Unit (CCMU), responsible for cadet safety and activities within the unit. In spring 2014, the CCMU won the Scholastic Pistol Program National Championship in Fort Benning, Georgia – after only their second year of competition – and also placed third in the Joint Service Academy Combat Weapons Match in Springfield, Massachusetts.

Zach has also served as the Guidon Bearer for Squadron 1 as well as the Executive Officer for the CCMU. An Air Force contract cadet, Zach graduated in the top third of his class in Field Training this past summer at Maxwell Air Force Base, Alabama, and Camp Shelby, Mississippi.

Upon graduation in May 2017, Zach will commission as a Second Lieutenant in the U.S. Air Force with aspirations to become a pilot of fighter jets or heavy bombers.

Zach is a talented cadet who has excelled in his Corps leadership opportunities. Between his duties as Platoon Sergeant of Squadron 1 and as Commander of the Marksmanship Unit, he has a clear  command of what it takes to lead effectively in difficult situations and to guide his fellow cadets and teammates to success. Zach has taken his love of competitive shooting and played a large part in the immediate success of our CCMU championship team. He has also displayed an innate ability to lead and build solid teams as a Platoon Leader, and I have every confidence that Zach will continue on this path of leadership and achieve his goal of being a pilot in the U.S. Air Force. Very proud of Zach and all that he has achieved, and will achieve in the future!