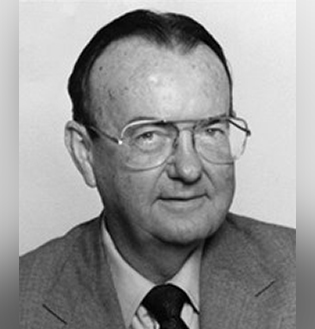 Thomas Frymire received his Bachelor’s Degree in Aeronautical Engineering from Texas A&M. His studies interrupted by World War II, he entered active duty with the Class of 1945 in the spring of 1943 as a private. After separation from the Army as a first lieutenant in the summer of 1946, Lt. Frymire returned to Texas A&M and completed his degree in 1947.

He began his career as a service engineer and founded the Dallas-based Frymire Engineering Co., Inc. in 1950 – one of the largest mechanical and electrical service company in the south – becoming Chairman of the Board 29 years later. Lt. Frymire was the President of the Aggie Club, a charter member of the 12th Man Club and was a sponsor three President’s Endowed Scholarships. He also donated the Kyle Field sign located on the west side of the stadium.

Lt. Frymire endowed major university scholarships, served as president of the Dallas A&M Club, served as a member board of directors of the Private Enterprise Research Center and was a charter member of the 12th Man Foundation. He was named an Association of Former Students Distinguished Alumnus in 1986 and received the Dallas A&M Club’s Jimmy Williams Award for outstanding service in 1978. Lt. Frymire was an ardent supporter the Corps of Cadets, as well as Texas A&M’s many academic, athletic and campus development programs.