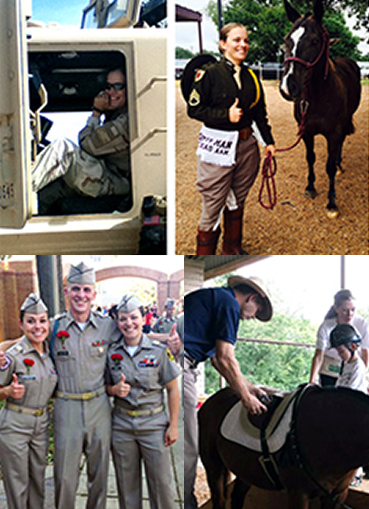 Stephanie Minor ’16 is an Agricultural Leadership and Development major from Keller, Texas, and is the daughter of Kristie O’Donnell and Greg Minor. She is serving as a Squad Leader for D-Company for the 2014 – 2015 school year.

A U.S. Navy Seabee veteran, Stephanie served on active duty for three years as a construction mechanic, with deployments to Afghanistan, Kuwait and Spain.

Active within the Corps, Stephanie is a member of D Company – organized specifically for Combat Veterans – and Parsons Mounted Cavalry, where she also serves as a student worker.

Stephanie works for Courtney Cares, an equine-assisted therapy program for people with disabilities which is managed by the A&M System and supported by Texas A&M University.  Parson’s Mounted Cavalry, the Texas A&M Department of Animal Science, and the Corps of Cadets support this exceptional program through strategic partnerships with the Professional Association of Therapeutic Horsemanship (PATH) and Ride on Center for Kids (R.O.C.K.). She is also involved in Horses for Heroes, a program for veterans to learn horsemanship and horseback riding.

After graduation in May 2016, Stephanie plans to earn her Masters of Occupational Therapy degree to become an equine-assisted therapist.

As a member of D-Company, Stephanie is one of our combat veteran cadets who brings a wealth of life experience and practical application into the Corps. Her deployments as a member of the U.S. Navy Seabee’s has given her a perspective and drive that will help to direct her to complete her education and fulfill her dream to become an equine therapist. Stephanie is a well rounded cadet with the life experiences that are going to help her achieve her goals. She is a leader, a role model, a mentor, and a superb cadet and veteran. I am very proud of Stephanie and all that she has achieved to date, and WILL achieve in the future. She is truly one of our very best!