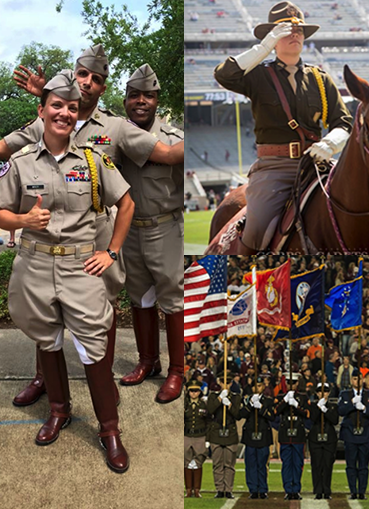 Stephanie Minor ’16 is an Agricultural Leadership and Development major from Keller, Texas. She is in Delta Company and is a member of Parsons Mounted Cavalry. Stephanie served as the Operations Officer for the fall 2015 semester and the 1st Platoon Leader for the spring 2016 semester.

Stephanie is a US Navy Seabee veteran. She served on active duty for 3 years as a construction mechanic, with deployments to Afghanistan, Kuwait, and Spain.

Outside the Corps she works for Courtney Cares Therapeutic Riding Program as the Equine Coordinator, as well as an instructor for the Horses for Heroes program. Courtney Cares is an equine assisted therapy program for children with disabilities, while the Horses for Heroes program assists veterans with disabilities to learn basic horsemanship and riding skills.

Stephanie has been selected to speak as a co-presenter in the National American College Health Association Conference in San Francisco on June 2nd. Veteran students can face various challenges as they adapt to the academic setting. Peer advising and service/support animals are frequently utilized to assist veterans in their transition to civilian life. She will be discussing how the Courtney Cares Horses for Heroes program significantly impacts the mental and physical well-being of veterans on campus.

After graduation she plans to pursue her Master’s Degree at Texas A&M, and plans to continue working with horses and horse therapy. We are all extremely proud to have Stephanie as a member of the Corps of Cadets. She is an exceptional cadet, but an even more impressive mentor and role model for the younger cadets. I am grateful for her service in the military and her decision to join the Corps of Cadets. She is an exceptional leader, and I know that she will continue to set the example for others in all that she does in the future.