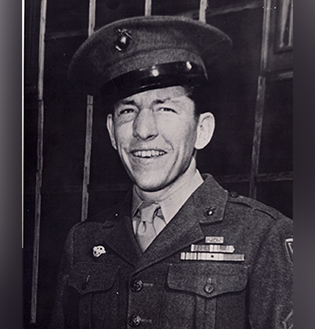 William Harrell studied Animal Husbandry at the Agricultural & Mechanical College of Texas and was a member of Troop C, Cavalry.

Sergeant Harrell and PFC Andrew Carter held a foxhole on a ridge, some twenty yards forward of the company command post, when Japanese troops infiltrated the lines in the early morning hours of March 3. They shot several of the advancing enemy until Carter’s rifle jammed. While Carter left to obtain another weapon, the assault on Sergeant Harrell continued.An enemy grenade tore off his left hand and fractured his thigh. Killing two of the enemy, Sergeant Harrell then challenged more enemy troops who charged his position, and placed a grenade near his head. Dispatching one man with his pistol, he grasped the grenade with his right hand and, pushing it, saw his remaining assailant destroyed, but his own hand severed in the explosion. By dawn, the enemy had withdrawn leaving twelve dead around the foxhole. His commander later called Sergeant Harrell’s position the “two-man Alamo.”

Sergeant Harrell was presented his Medal of Honor by President Harry S. Truman at the White House on October 5, 1945 and promoted to Staff Sergeant upon his discharge from the Marine Corps in 1946.

Staff Sergeant Harrell was the seventh Texas Aggie awarded the Medal of Honor.