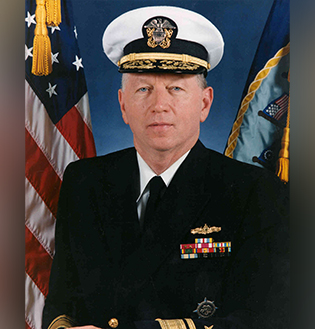 Rear Admiral Robert Smith III, received a bachelor’s degree in agricultural economics from Texas A&M and is a 1977 graduate of Louisiana State University’s School of Banking of the South. As a student at Texas A&M, Admiral Smith was a member of the Corps of Cadets, the Agricultural Economics Club and the Dallas Hometown Club.

Admiral Smith was commissioned into the United States Navy in 1962. He is a graduate of the Naval War College and also attended the John F. Kennedy School of Government at Harvard University, completing a course in national security in 1991.

During his 35 years in the United States Navy, he served in assignments in the Pacific, Washington, D.C. and the Atlantic and retired in 1996 as chief of staff to the commander, United States Pacific Fleet, Pearl Harbor, Hawaii. In 1987, Smith was selected a rear admiral (lower half) and later earned his second star in 1991.

The Navy recognized his distinguished military career with honors including the Defense Superior Service Medal, the Legion of Merit, the Meritorious Service Medal and the Navy Unit Commendation Award.

In 1987, he was assigned responsibility for the activities of the Bank’s Houston and Gulf Coast Region and has had numerous other special assignments in coordinating Federal Reserve System and Federal Reserve Bank of Dallas responsibilities. He currently serves as President and Chief Executive Officer at Texas A&M University at Galveston.

Admiral Smith is actively involved as a Texas A&M former student and an ardent supporter and past president of The Association of Former Students and the Dallas A&M Club and past chairman of the Texas A&M Foundation.