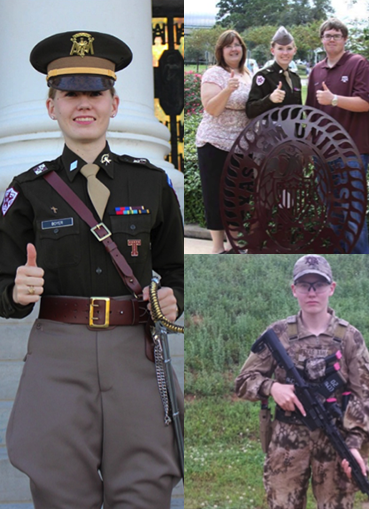 Naomi Boyer ’16 is an Agricultural Leadership and Development major with an emphasis in Animal Science, from Blooming Grove, Texas. She is the daughter of Tim and Marlyn ’86 Boyer and is a member of Company N-1.

Naomi is very active with the Corps of Cadets Marksmanship Unit (CCMU) and has been a member for 4 years. She has served as the Unit Public Relations Officer for her sophomore, junior, and senior year. Last year at the Scholastics Pistol Program she took home the High Lady Collegiate Shooter of the rim fire division at both Regionals and Nationals. She has also been on 1st and 2nd place teams at Regionals. Naomi was also awarded High Lady during the Military College Combat Shooting Championship (MCCSC) at Fort Benning, Georgia, which is a pistol and rifle competition among the Military Colleges.

Naomi says her passion for this sport has only grew stronger with her time in the Corps and she’s very proud to be one of the 3 ladies on the team this year. She is an exceptional shooter and leader for the CCMU, and has deservedly earned many awards and accolades as a result. I am proud that the Corps of Cadets and the CCMU have helped foster her goals within the shooting sports world.

Naomi will graduate this May with a Leadership Studies Certificate from the Hollingsworth Leadership Excellence Program. The skills she has learned in the Corps and in the Leadership Program will help immensely as she seeks to work in the animal science industry and also plans to continue shooting. She is a tireless and selfless cadet who works hard and consistently displays what a true woman of character she is. We wish her the best of luck in all of her future endeavors in the animal science industry and in the world of shooting sports!