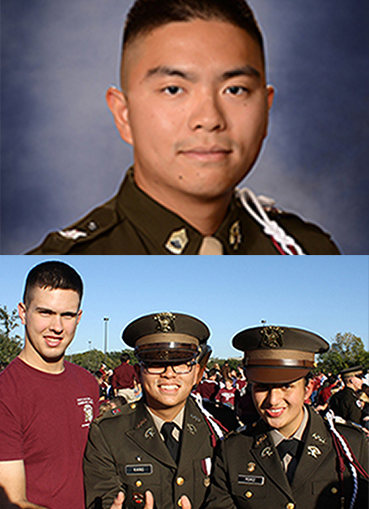 Nahua Kang ’14 is a History major and a French and Economics double minor from Xiamen, China. He is the son of Wei Zhou and Jian Kang.

Growing up in China, Nahua chose to attend Texas A&M and join the Corps to “challenge himself and have a different college experience from many of the Chinese students who study in America.” He attributes his independence and improved spoken English to the Corps of Cadets. He also speaks fluent Chinese Mandarin and is currently studying French and Arabic.

Active within the Corps, Nahua is a Junior Platoon Sergeant, one of two Scholastic Sergeants for Squadron 20 and a member of the O. R. Simpson Honor Society.

Outside the Corps, Nahua was recently appointed as the Chair for the Student Service Fee Advisory Board (SSFAB). The Board provides the Vice President of Student Affairs with recommendations on budgets and requests from twenty departments, and it also reviews requests for fees for the Student Health Center, Recreational Sports and the University Center. A member of the MSC Wiley Lecture Series, Nahua has served as a programming director and a designer for three symposia on the U.S. Debt Crisis, the Arab Spring and the Iranian Nuclear issue. He is also a member of the Academy for Future International Leaders.

Nahua visited Vienna, Austria as a member of the Cornerstone Program Learning Community in March, 2012. He is currently a member of the Spring Leadership Exchange, and visited the Texas A&M Qatar campus during Spring Break, 2013.

A recipient of a Corps 21 Scholarship and on the Dean’s Honor Roll for the College of Liberal Arts since 2011, Nahua was also recently selected for the Who’s Who Among American Colleges and Universities at Texas A&M and received the Buck Weirus Spirit Award for 2013.

Upon graduation next year, Nahua plans to attend law school. He is interested in working for the United Nations, an international law firm or a multi-national business company. Whatever his final pursuit, he plans to travel extensively around the world both personally and professionally.

As one of our international students, Nahua has taken full advantage of his time at Texas A&M and the Corps of Cadets. I’m very proud of him and his accomplishments, and have no doubt that he will go on to achieve great success in the future.